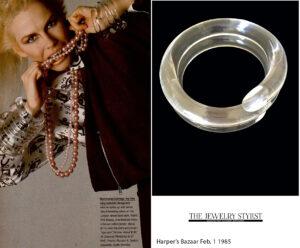 Thirty-nine years ago,  the jewelry designed by Judith Hendler  (Acri-Gems) was considered très chic and avant-garde. Then, as now, bestowed the name, “Queen of Acrylic,” her jewelry designs are the perfect accessory for the Fall 2016 season–featuring a range of Lucite and Acrylic jewelry. Her vintage jewelry is as timely today as it was gracing the fashion editorials of the 1980s. Judith was quoted in 1989 as saying, “I like jewelry that will stay classic. I want the person who buys it to be able to put it on three to 10 years from now and still feel it looks and feels as fresh as the day she bought it.” Well, 27 years later after being interviewed for the Coral Springs Forum by Stephanie Krulik, Judith’s designs are still fresh and fashion forward.

Both Lucites and acrylics are being featured on the runways this season by the likes of Anteprima, Eudon Choi, Mary Katrantzou, Ohne Titel, Stell McCartney,Thomas Tait. Judith’s jewelry was recently featured in the special issue of Traditional Home magazine, 2016 and will be featured  (or worn) by the following this spring and summer: Miley Cyrus; V Magazine; Twin Magazine (bi-annual international fashion book; Teen Vogue; Cosmopolitan March and April;  Vogue. Com Febuary; Mercedes-Benz fashion show this summer 2017. 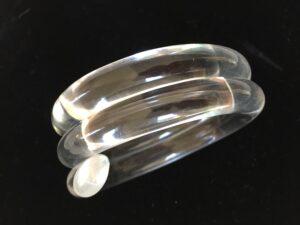 The comments are closed